Durrësi, the biggest seaport of the country, is located 34 km away from Tirana. It is the most ancient city in Albania, with almost 3,000 years of history. Its foundation dates back to 627 B.C. when the Corinthians and settlers from Corcyra invaded the Illyrian territory of the Taulants. The city is home to many ancient archaeological sites and finds. The most notable tourist attraction in Durrësi is the amphitheatre of the Roman Emperor Adrian with 15,000 seats, the second biggest amphitheatre in the Balkans. During the 9th century, a small church with mosaic-covered walls was built nearby.

It is one of the most ancient cities in Albania. Known by name of Epidamnus, it was established in the year 627 B.C. by colons coming from Corinth and Corcyra. Later on, the name changed to Durrahium (according to mythology the nephew of Epidamnus). During this period, the city flourished and became the main port of the Eastern Adriatic. Between the 1st and the 3rd centuries, it played a major role as a trading centre along the ancient Egnatia road, which connected Rome with Byzantium.

Everyone has a lot of things to see in Durrës, considering it a getaway to another world. Today the city is well known for the beach resort of Durres with sandy beaches and warm sea waters. It is about 10.5 km long and is frequented by Albanian and foreign tourists from May until October. City Walls, Amphitheatre, Roman Thermal Baths, Byzantine Forum, Archaeological Ethnographic are some of the must-see attractions in Durres. 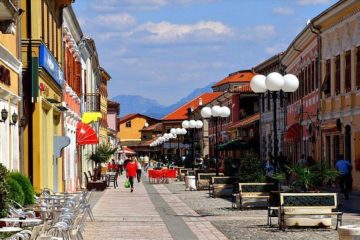 The city was returned to Albanian control

The city is known for its typical
One tour per person